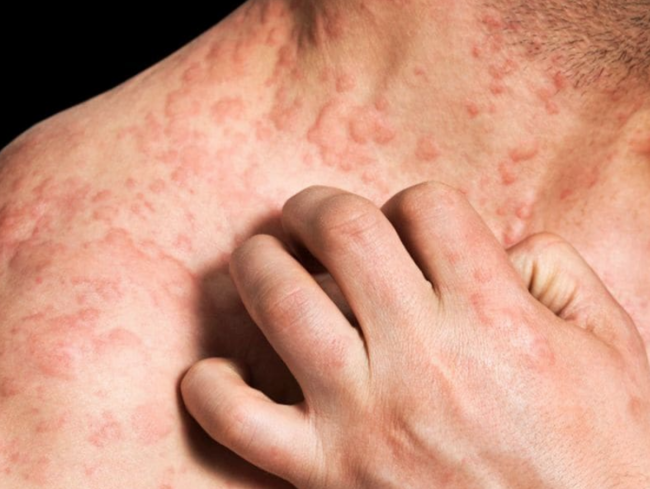 By Alan Mozes, HealthDay Reporter MONDAY, July 16, 2018 (HealthDay News) -- Itching, blisters, sores and inflammation are a continuous and debilitating source of pain, shame and misery for many people who struggle with the allergic skin condition known as eczema, researchers say.And a new survey suggests that many of those battling moderate-to-severe eczema suffer from an inability or reluctance to engage in activities and socializing, which leads to a considerably diminished quality of life.

For some eczema patients, their quality of life is poorer than those who have a wide range of other chronic health issues, including heart disease, diabetes and high blood pressure, the researchers added."The more severe the atopic dermatitis [eczema], the worse the overall health, quality of life and life dissatisfaction," said study author Dr. Jonathan Silverberg."I see some of the toughest cases of atopic dermatitis around, so I can't say I was terribly surprised by this," Silverberg explained. "But I think most people who don't live with atopic dermatitis are surprised to hear just how debilitating it can be."Silverberg serves as director of the Northwestern Medicine Multidisciplinary Eczema Center and the Contact Dermatitis Clinic at Northwestern Memorial Hospital, in Chicago.According to the National Eczema Association, roughly 30 million Americans -- ranging from infants to seniors -- suffer from one of several different forms of the skin condition.The exact cause remains elusive, and there is no known cure. And though topical drugs and immunotherapy can help manage the condition, treatment is complicated by the fact that "no two eczema patients are exactly alike," Silverberg said."For most patients, flares can come for no apparent reason at all," he noted. "Many patients are looking for that one [environmental] trigger they can avoid to cure their atopic dermatitis. For most, it doesn't exist."And that means that patients with different triggers and different degrees of severity and symptoms will require a different "tailored treatment approach" for what will likely end up being a long-term chronic disorder, said Silverberg.The survey of just over 600 eczema patients (with mild, moderate, or severe eczema) revealed one all-too-common thread: a broad dissatisfaction with one's life.Nearly three-quarters of those polled were white. Just over half had mild eczema, nearly four in 10 had a moderate condition, and just over 8 percent described their condition as severe.Pooled together, about one-quarter said they were in fair health, while nearly 16 percent described their overall health as poor, the findings showed.Among those with severe disease, about 35 percent said they were either in fair or poor health, while almost one-third said they were somewhat or very dissatisfied with life.But even among those with mild eczema, nearly 18 percent said they avoided socializing because of their appearance, while 23 percent limited their daily activities. Those figures shot up to 40 percent and 43 percent, respectively, when moderate and severe patients were included.The most effective way patients can limit eczema's impact on quality of life is to "seek care earlier and aim for tighter control of their symptoms," Silverberg advised."Some patients may say to themselves 'it's not so bad,' and not seek care," he said. "Then they end up suffering in silence as things worsen and they eventually get to a point of desperation, and at that point have a much harder time treating their eczema."The impact that eczema can have on life satisfaction is not lost on Dr. Richard Gallo, chairman of dermatology at the University of California, San Diego."We have long known that eczema has an enormous impact on the quality of life, not only for the patient but also on parents of children with eczema," he said.Still, "there is good news for eczema patients because of new scientific understanding of the cause and treatment," Gallo added. On that front, he highlighted work currently underway exploring the potential benefits of using probiotics applied to the skin.But, Gallo said, "eczema is complex and patients really need to talk carefully to their doctor to understand the type and causes of their eczema."SOURCES: Jonathan Silverberg, M.D., Ph.D., MPH, director, Northwestern Medicine Multidisciplinary Eczema Center, and director, Contact Dermatitis Clinic, Northwestern Memorial Hospital, and associate professor, departments of dermatology, preventive medicine and medical social sciences, Northwestern University Feinberg School of Medicine, Chicago; Richard Gallo, M.D., Ph.D., professor and chairman, department of dermatology, University of California, San Diego; July 16, 2018, Annals of Allergy, Asthma and Immunology

Here are some questions and conversations from MyEczemaTeam:

• "Skin around elbows and scalp itchy today. Hands hot and sore to touch. Getting v depressed that I have to worry about skin when I should be playing etc with the family."

• "Have to live with this on a daily basis. It's depressing, but I have learned to cope with it, mainly because I have to be able to function, I cannot let this stop me from going to work every day and earning a living."

• What treatment is effective for eczema on the scalp? I’ve tried to be discreet about it as possible especially in public and I sometimes feel a bit embarrass cuz I don’t want others to think I got lice.

Does your eczema severely impact you or someone you care for's quality of life? Share in the comments below or directly on MyEczemaTeam.

By Robert Preidt, HealthDay Reporter THURSDAY, May 3, 2018 (HealthDay News) -- A treatment that...