Atopic Dermatitis, Asthma, and Allergies: How Are They Connected? 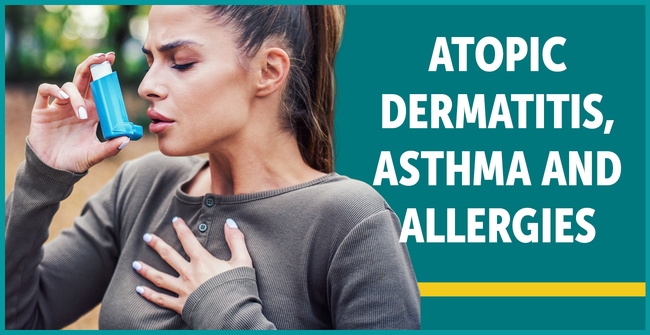 Dealing with atopic dermatitis is tough. There are the symptoms of a chronic skin condition — dry skin, itching, skin rashes, and more. On top of that, many people who have AD also experience other allergic conditions, as well as asthma.

The three conditions seem to go together. Sixty percent of people with atopic dermatitis will later have asthma or allergic rhinitis (commonly known as hay fever), and 30 percent go on to develop food allergies. This progression of conditions — from AD to other allergies and asthma — is known as the “atopic march.”

MyEczemaTeam spoke with allergist Dr. Alan B. Goldsobel about the atopic march and how it develops. Dr. Goldsobel is an adjunct clinical professor at Stanford University School of Medicine and a past president of the California Society of Allergy, Asthma and Immunology.

What Is the Atopic March?

The atopic march is strongly associated with atopic dermatitis in infants and very young children. “It’s more common to have asthma onset in childhood if you have AD in the first few months of life,” said Dr. Goldsobel. “I tell parents of children with AD that their child is at very high risk of developing hay fever and asthma.”

One study found children who had atopic dermatitis were almost three times more likely than children in the general population to have developed allergic rhinitis and asthma at a five-year follow-up. The likelihood of AD leading to these other conditions rises along with the severity of the AD. Between 20 percent and 30 percent of children with mild AD go on to develop asthma, compared with nearly 70 percent of children who experience severe AD.

There is little research on how and whether the atopic march affects people who develop adult-onset AD. However, most people with AD first experience the condition in early childhood.

What Causes the Atopic March?

People with atopic dermatitis often report having a family history of the condition, and unsurprisingly, many cases of AD have a genetic link. Up to 50 percent of people with AD have variants in a gene associated with filaggrin, a protein that helps create the outermost layer of the skin, called the epidermis. These gene variants result in difficulties producing filaggrin, making the skin more sensitive and prone to inflammation — and eventually AD. Although not every child with AD will have these gene variants, those who do are more likely to have flare-ups and need stronger treatments, such as topical steroids.

These gene mutations are also associated with an increased risk of developing asthma and allergies, but only in people who have previously experienced AD. Researchers think people with AD are more likely to develop allergies and asthma because allergens in the environment enter through breaks in AD-inflamed skin.

As Dr. Goldsobel explained, “This theory is called the dual allergen hypothesis, as proposed by Dr. Gideon Lack. Exposure to food allergens through the skin, especially in AD infants, can lead to allergy, while consumption of these foods at an early age may actually result in tolerance.”

These allergens can be tiny particles in the environment. According to Dr. Goldsobel, a study found that children who developed peanut allergies had higher-than-average levels of peanut allergens in the dust vacuumed up in their homes. “It wasn’t just that adults were touching children with fingers covered in peanut butter,” he said.

Once allergens enter the skin, they interact with immune cells in the epidermis and the dermis (the layer beneath the epidermis). This causes sensitization — the process by which the body produces excess immunoglobulin E (IgE) antibodies. “Having this skin defect leads to this immune system reaction. This leads to someone developing not only food allergies — it also leads them to have a higher risk for developing hay fever, allergic rhinitis, and asthma,” Dr. Goldsobel explained.

Atopic conditions — such as asthma, AD, and other allergies — have been on the rise worldwide. Several environmental factors might be to blame. The hygiene hypothesis states that better standards of hygiene may lead to more cases of atopic conditions. In the past, childhood exposure to lots of dirt and grime and infections may have helped kids develop more tolerant immune systems. There is some research that children who grow up on farms around animals, plants, and dirt are more resistant to allergies and asthma.

Early childhood use of certain medications, especially antibiotics, could be increasing the worldwide rates of atopic conditions, as could a lack of vitamin D and an increased obesity rate.

Do Atopic Conditions Have Treatments in Common?

Because atopic dermatitis, other allergies, and asthma all involve the same underlying immune system response, some treatments that work to ease AD may also treat asthma and allergy symptoms.

Antihistamines work to block the effects of histamine, a chemical released by the immune system. Excess histamine causes the symptoms associated with allergic rhinitis and asthma, such as wheezing, trouble breathing, coughing, and a runny nose. Excess histamine also triggers the skin symptoms associated with AD, such as itching. (It should be noted that antihistamines don’t work against food allergies. The only way to avoid an allergic reaction in this case is to avoid the offending food.)

Antihistamines are sometimes used as an add-on treatment for AD. Their anti-itching effects might stop a vicious cycle in which scratching further inflames the skin, creating more itching. However, there is mixed evidence for antihistamines’ effectiveness against AD itching. A 2019 review of studies found that taking antihistamines had little to no effect on how people with atopic dermatitis assessed their itch levels. Some antihistamines can cause sleepiness and are therefore best used for cases of itching at night. Topical antihistamines should be avoided for AD, as they can worsen skin inflammation.

Corticosteroids come in different forms, such as tablets, inhalants, and topical creams and gels. Someone with environmental allergies might use a corticosteroid nasal spray to reduce sneezing and nasal drip. Corticosteroid inhalers are useful for asthma. People with AD usually use corticosteroid creams applied directly to the skin in the form of a cream, ointment, lotion, or spray. Topical corticosteroids can cause skin thinning, acne, rashes, and stretch marks. Due to these and other potential long-term side effects, steroids should not be used daily for more than two to four weeks in a row.

Biologics are a class of medications produced by bioengineering proteins. Biologics work by targeting immune cells or molecules associated with inflammation. Biologics may be prescribed when standard medications are not effective in controlling AD or severe asthma.

Biologic drugs approved by the U.S. Food and Drug Administration (FDA) for atopic dermatitis and/or severe asthma include:

“Dupixent has been a great help for people with severe AD,” Dr. Goldsobel said. “Many patients previously had to be treated with medications that were more suppressive of the immune system and had more serious side effects.”

Biologics are injectable drugs. Common side effects of biologics include conjunctivitis (pink eye), cold sores, and infections at the injection site.

Why Is the Atopic Connection Important?

Not everyone with atopic dermatitis will develop other allergic conditions or asthma. However, understanding the connection between the three conditions — and recognizing AD as a risk factor for the development of the other two — is important. If you or your child have AD, you can monitor for the development of allergies and asthma. Early diagnosis and treatment for asthma and allergies can help manage and control symptoms.

Symptoms of asthma include:

All of these may be worse at night or after exercise.

Symptoms of allergies can include:

By joining MyEczemaTeam, the social network and online support group for those living with eczema and atopic dermatitis, you gain a support group more than 32,000 members strong. Allergies and asthma are frequently discussed topics.

Here are some conversations about AD, asthma, and allergies:

Are you dealing with AD and asthma or allergies? Comment below or go to MyEczemaTeam today and start a conversation. You'll be surprised how many others share similar stories. Alan B. Goldsobel, M.D. is an adjunct clinical professor at Stanford University School of Medicine. Learn more about him here.

Jessica Wolpert works to empower patients through the creation of content that illuminates treatments' effects on the everyday lives of people with chronic conditions. Learn more about her here. What Is Atopic Dermatitis?