Eczema vs. Psoriasis: Are They One and the Same? 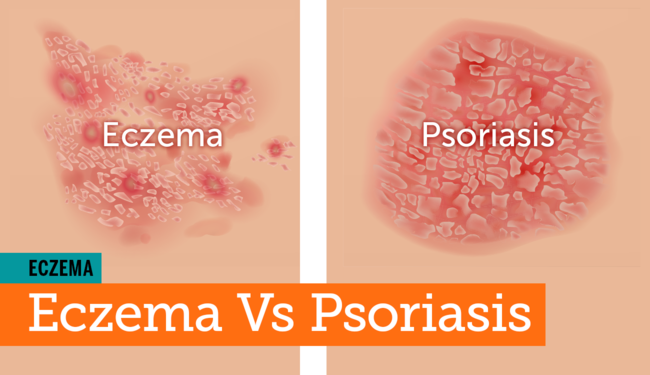 Eczema and psoriasis are separate conditions, although they share some similar symptoms. Eczema is more commonly found in babies or young children and, unlike psoriasis, may go away over time. It is uncommon to have both eczema and psoriasis at the same time, but it is possible.

How to Tell the Difference Between Eczema and Psoriasis

The most common form of psoriasis generally appears as red, scaly patches of dry, cracked skin. Eczema patches can be brown-gray or red in appearance, may have pustules, and are typically less well-defined. Eczema tends to form where the skin folds. Additionally, while both conditions cause itching, the itching associated with eczema tends to be more extreme.

Eczema vs. Psoriasis on the Scalp

While both psoriasis and eczema on the scalp (seborrheic dermatitis) have commonalities such as itching and reddish skin, eczema does not usually appear as dry or as thick. Additionally, eczema scales on the scalp have more of a whitish or yellowish hue versus a silvery one common in psoriasis.

Eczema vs. Psoriasis on the Face

Psoriasis is typically found on elbows and knees, but a person with scalp psoriasis may find patches extending to the forehead, ears, and other areas close to the face. Eczema may also be found on the face and appears as pus-filled blisters. In both cases, there can be extreme itching and discomfort.

Eczema vs. Psoriasis on the Elbows

Eczema is more often found in folds near the joints, such as the inside or crook of the elbows. On the other hand, psoriasis can commonly be found on the elbow itself.

Eczema vs. Psoriasis on the Hands

Due to exposure to soaps, animals, and other allergens, eczema is commonly found on the palms of the hands. Psoriasis on the hands can be found in the palms, back of the hands, knuckles, and nails.

Eczema vs. Psoriasis on the Legs

Psoriasis is often found on knees and legs. The type of psoriasis dictates the size of the spots, from smaller and widespread (guttate psoriasis) to larger plaques (plaque psoriasis). Eczema on the legs tends to form on the folds, such as behind the knees.

Eczema vs. Psoriasis – Below the Surface

Although the skin symptoms of psoriasis and eczema can look similar, the conditions are very different below the surface of the skin. Eczema is frequently related to allergies; many people with eczema also have food allergies, asthma, or both. Psoriasis is a systemic disease, meaning that it affects the whole body. Psoriasis causes inflammation, fatigue, and other symptoms. About 30 percent of people with psoriasis develop psoriatic arthritis, which can cause progressive joint damage and lead to disability. Psoriatic disease can also cause uveitis (eye inflammation), which can result in loss of vision.

Causes of Eczema vs. Psoriasis

Diagnosis of Eczema vs. Psoriasis

Eczema is typically diagnosed by observing the skin and asking questions about patient and family history. A patch test (attaching samples of different substances to the skin with tape) may be performed to confirm whether eczema is due to a specific allergen. Read more details about eczema diagnosis.

Psoriasis is usually diagnosed by a dermatologist by performing a visual exam and taking the patient and family history. In some cases, the doctor may do a biopsy (remove a small piece of skin for laboratory testing) to confirm the diagnosis.

Treatment of Eczema vs. Psoriasis

Both eczema and psoriasis are treated by modulating the immune system. Topical Corticosteroids are commonly used to treat both conditions. The effects of topical medications are mostly limited to the skin. In severe cases of eczema, it may be necessary to take systemic oral medications such as Methotrexate or Mycophenolate mofetil. Read more about eczema treatments.

Since psoriasis is a chronic autoimmune disease that can cause systemic symptoms and progressive joint damage, it is important to calm the immune system throughout the body to control inflammation and reduce autoimmune attacks on the skin and joints. Systemic treatments for psoriasis include immunomodulators such as Methotrexate and newer biologic drugs such as Enbrel (Etanercept), Humira (Adalimumab), and Stelara (Ustekinumab), which are injected.

Phototherapy, or light therapy, may also be helpful in some cases of psoriasis or eczema.

What’s the difference between hives and eczema?
Hives can be similar in appearance to eczema, with itchy red patches of skin on different parts of the body. However, hives are generally smoother in appearance and quickly disappear. Hives rarely bleed, and the onset can be sudden. Hives may occur once, may last for a short period over time or over months, or may be chronic. Hives are usually caused by an allergy.

Is there an eczema and psoriasis cream?
There are several topical medications such as lotions, creams, and ointments that may be prescribed for either eczema or psoriasis.

Kelly Crumrin is a senior editor at MyHealthTeam and leads the creation of content that educates and empowers people with chronic illnesses. Learn more about her here.

Say "No" by Saying "Yes" to Something Else

When your skin is itchy, discolored, or dry, it’s easy to feel frustrated and overwhelmed — not...

When your skin is itchy, discolored, or dry, it’s easy to feel frustrated and overwhelmed — not...
read article >

Many people with eczema (also called atopic dermatitis) have sensitivities to different...